Trilingual families: Does it really work?

Type “trilingual families” in Google today, and you hit about 1,320,000 results (thank you, Google). But growing up as a child in a trilingual family thirty-odd years ago, I am sure that there was not this abundance of research articles, books and blog posts regarding the topic of families speaking two, three or even more (shock, horror) languages at home. That’s why I always considered my linguistic upbringing to be kind of an oddity – albeit an exceptionally fortunate one.

I was born in Geneva, Switzerland. As part of the Romandie, the official language in Geneva is French. However, my parents were both originally from the the canton of Bern in the Swiss German-speaking part of Switzerland. So, while I spoke French at kindergarten and with my friends, my mother spoke exclusively to us in Bärndütsch (the Bernese Swiss German dialect) and expected the same in return.

So that makes two languages, right? Yes, we would have been a stinknormale bilingual family had my father not worked for an American company and decided to do his part by raising my sister and me in English. Then came a three-year move to the States when I was about five years old, consolidating both my English skills and that “slight” American twang that clearly marks me out as foreign (as my neighbour oh-so-kindly pointed out) here across the pond. 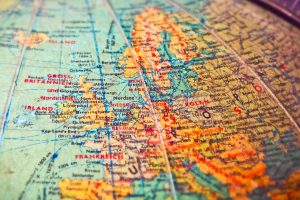 Fast-forward twenty years and I meet my future husband who is from Jura, a French-speaking canton in Switzerland, but who studied in Basel and is also fluent in English and German. Although we met in Switzerland, we have now lived in Manchester for almost nine years and speak a mix of English and French together at home. Whenever we are back in Switzerland visiting family, other people generally observe our linguistic ping-pong rounds with quite some curiosity, amusement or confusion, depending on the audience.

Now that we have two young boys of our own, we are naturally faced with the gargantuan* task of raising them trilingually as well. My husband speaks to them in French, I join the chorus in Bärndütsch and they get spoon-fed Mancunian English at nursery. Sounds simple enough, n’est-ce pas? Unfortunately, no. My older son is just under three years old and already sports that stiff-upper-lip English resistance to learning foreign languages. In other words, he understands everything we say to him but answers exclusively in English. Should we consider it as one small step for our languages, a giant leap for English? Or the other way around?

In a series devoted to the subject of language acquisition in children growing up in a trilingual environment, I will shamelessly use my son as a guinea pig as I track his progress in “learning” three languages, try to investigate the advantages and disadvantages of the OPOL (one parent, one language) method, evaluate how modern society perceives such endeavours, and discover the effects of multilingualism in children in general.

*Yes, I have gained newfound respect and gratitude for my parents’ perseverance and dedication. Even though both of their daughters now have language-based careers, I don’t think that they are even fully aware of the magnitude of the cultural and linguistic gift that they bestowed on us.